The Hyde Park Blast board of directors announced that $60,000, raised from the one-day event on June 30, 2018, was donated to two local cancer-fighting charities.

A donation of $51,250 was presented to Brooke and Keith Desserich, co-founders of The Cure Starts Now, an organization dedicated to funding pediatric brain cancer research. Research that many experts believe will lead to the homerun cure, a cure for all cancers! 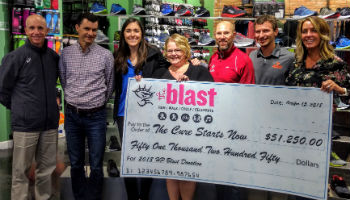 The Cure Starts Now focuses on helping kids like last year's ambassador, Myles Baughman, 2, who is battling Diffuse Intrinsic Pontine Glioma, most commonly known as DIPG. He is one of the youngest documented cases. Learn more about Myles at www.HydeParkBlast.org.

The Karen Wellington Foundation, which started in 2007 to honor Karen's life and share her legacy of living life to the fullest, was the beneficiary of $8,750 in donations, resulting from their participation in the 2018 Blast. They strive to create #FunNow for families experiencing breast cancer. 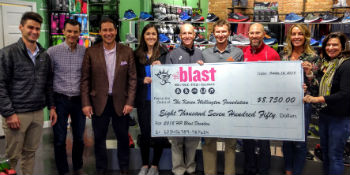 The 2018 check presentation, which was hosted at Fleet Feet Oakley, featured another big announcement. Doug Huff, Hyde Park Blast Sponsorship Director, revealed that long-time Blast supporter, Medpace is the 2019 Presenting Sponsor of the Hyde Park Blast. “We are super excited that you guys are going to be part of the Blast again,” Doug told Eric Fancher, of Medpace. “You’ve stepped up in a major way and we are so thankful for your support of our event.”

The 19th annual Hyde Park Blast will be held on Saturday, June 29, 2019, with a full day of activities including the 4-mile run through Hyde Park, kids’ fun runs, cycling races on the Hyde Park Square and a rockin’ block party with live music in the evening.

About the Hyde Park Blast

Co-founded by Cheryl Neiheisel and Chad Sims in 2001, The Blast is one of Cincinnati's largest neighborhood events. It includes a 4-mile morning run/walk, kids race, criterium races and a block party with live music in the evening. Since 2001, more than $500,000 has been donated to CancerFree Kids, the Leukemia & Lymphoma Society, Give Back Cincinnati, the Cancer Support Community, The Cure Starts Now and the Shemenski Foundation. Learn more at www.hydeparkblast.org.