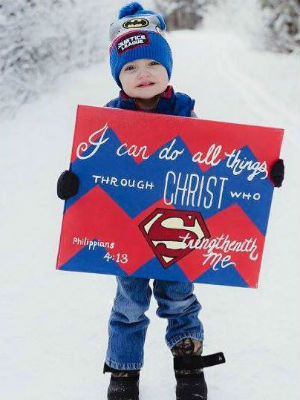 It started in the fall of 2017. LJ’s eyes started turning inward occasionally and he was having trouble going up and down the stairs. His parents, Christina and Joshua, noticed his hands would shake when trying to concentrate. After repeated doctor’s appointments, he was referred to a neurologist who ordered an MRI, which confirmed a DIPG diagnosis at just two years old. His parents and care team were shocked. He didn’t have the traditional, sudden onset of symptoms that DIPG usually presents as. “LJ’s was much more gradual,” Christina recalls.

Christina and Joshua immediately went into fight mode for their son, which included monthly flights with LJ and his older sister, Emmaleigh, to Cincinnati Children’s Hospital from their home of Anchorage, Alaska. In January 2019, they moved to the Cincinnati-Dayton area to be closer to Children’s, where LJ is currently enrolled in a clinical trial that involves daily oral chemotherapy. “It’s called targeted chemo and doesn’t make him immunocompromised.”

In spite of the hardships the Barnes family is enduring, their love for one another gives them strength.

Now, it’s the Cincinnati community’s turn to give LJ and his family strength, rallying behind them when LJ serves as the Hyde Park Blast ambassador on Saturday, June 29.

“He’s so loving,” Christina says. “He just says ‘I love you’ so much and that’s never changed. He’s always been like that. That’s who he is.” 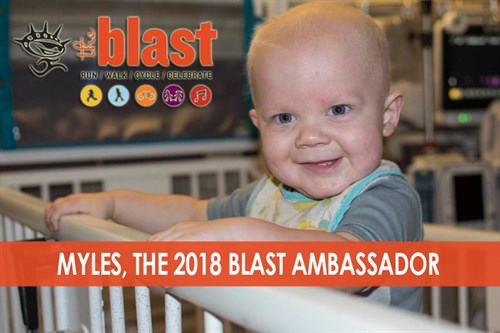 It all started around his one-month checkup; Myles wasn't eating, had lost a significant amount of weight and his eyes started to shake. He was immediately admitted to Cincinnati's Children's Hospital, where he received an ultrasound of his head that revealed swelling in his brain. From there, his care team ordered an MRI that showed a brain tumor in his brain stem. Soon after, a biopsy revealed the unimaginable: Myles was diagnosed with DIPG. He is one of the youngest documented cases.

Now, Myles and his parents, Sara and Nate, have made it their mission to raise DIPG awareness. "We want people to know that babies can be diagnosed. It's not just young kids."

Myles turns 2 on June 29 and will be celebrating his second birthday as ambassador of the Hyde Park Blast on June 30! Join us that day to rally behind Myles and his family and help us acheive the homerun cure for cancer!

In January 2016, Kambria Koebbe, of Dry Ridge, KY, started experiencing constant nausea. But she never had a fever or other symptoms to explain the vomiting.

"We took her to doctors, but her blood work never suggested anything was wrong," Kambria's mom, Amberly, recalls.

By March, Kambria, age 7 at the time, was drained and couldn't walk for any distance without getting exhausted. So Amberly took Kambria to the emergency department at Cincinnati Children's Hospital.

"She had appointments lined up, but I opted to take her to Children's a night early," Amberly says.One of the doctors working that night noticed that Kambria's symptoms resembled those of a former patient. "That led us to get a CT scan," Amberly explains. "It showed a mass in her brain and extreme fluid buildup."Kambria was sent into emergency surgery, where surgeons placed a tube in her brain to relieve the pressure. From there, she had a craniotomy to remove as much of the tumor as possible, followed by a shunt placement to drain the fluid.

"She's So Passionate about Everything and Loves Deeply".

Since then, Kambria's had 10 months of chemotherapy and weeks of proton radiation therapy. The tumor, classified as Progressive Diffuse Low Grade Glioma with Ependymal features, shares characteristics of DIPG. Kambria's family is hopeful that she will be accepted into a clinical trial.

In spite of the unimaginable challenge Kambria has endured over the last 18 months, her spirit and zest for life never wavers.

"Kambria has truly been the light in my life, from the beginning," Amberly says. "Her spirit is always so optimistic despite everything. She's so passionate about everything and loves deeply. She's far braver than I could ever be and I get my strength from her."

Kambria passed away from her cancer in 2017, but we know she will be cheering everyone on from heaven with her bright smile and infectious laugh!  We will miss her dearly this year! 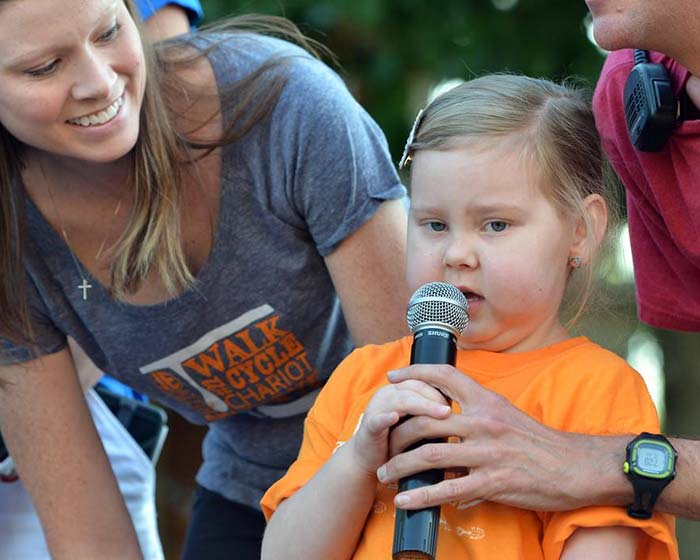 So her parents, Brittany and Nick, rushed her to Cincinnati Children's Hospital where they learned the unimaginable: Brooklyn was diagnosed Diffuse Intrinsic Pontine Glioma (DIPG) – just seven days after her fifth birthday.

Brooklyn underwent emergency brain surgery and is now undergoing regular radiation and chemotherapy treatments that are taking a physical toll on her tiny body.

Her courageous attitude and vibrant personality throughout it all, however, are brighter than ever. With her beautiful smile, knock-knock jokes, Donald Duck impressions and infectious personality, it's hard not to smile when she's around.

Most recently, Brooklyn was selected as the 2016 Hyde Park Blast ambassador – or queen, as she prefers! When she's not at preschool or running around with her cousin, Jeffrey, Brooklyn is telling stories or playing with her pets – a dog, Lulu and cat, Penny.

Brooklyn earned her wings in April 2017. 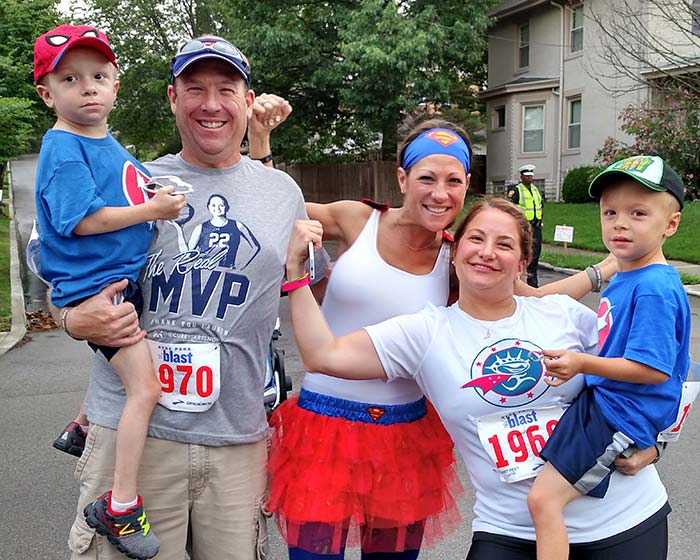 Luke Knapke, 4, was diagnosed with an inoperable brain tumor, Pilomyxoid astrocytoma (PMA), in July 2013, nearly six months after his second birthday. Then, just a year later, his care team at Children's Hospital discovered another tumor -- this one, slightly different from the first. His doctors ran tests to discover that the second tumor, shaped slightly different than the original, but located near the same area of his brain, was related to a rare genetic disease, neurofibromatosis, that causes tumor growth.

After spending 61 days inpatient at Children's, and monthly chemo sessions, his first tumor shrank down to nothing. He's in remission of that tumor. Once his doctor discovered the second tumor, in the fall of 2014, they changed his care plan to weekly chemo treatments.

Luke, described as a "bubbly firecracker," by his mom, Laura, is as outgoing and energetic as they come. As he walks through the halls of the hospital, he doesn't let a stranger pass without yelling, "Hi!" "I wish I could videotape him. It's hysterical," Laura says. When he's not at the hospital, he's at school, playing with his twin brother, Colin, or running around in his Superhero cape, spreading smiles to those he encounters. Visit his Facebook page, Super Luke's Journey to the Finish Line to get daily updates on how's he's doing.

In the words of Super Luke himself, "Bam! Pow!" 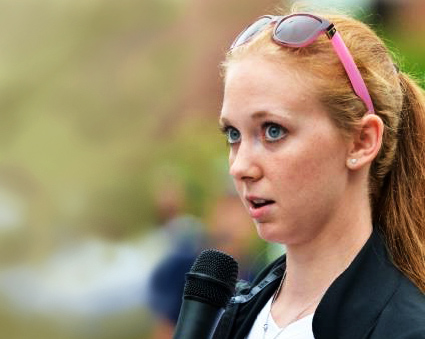 The 18-year-old was diagnosed with Diffuse Intrinsic Pontine Glioma (DIPG) on Nov. 20, 2013, and continued to play basketball for the Lawrenceburg Lady Tigers throughout six weeks of radiation and study chemo, missing only one game, so she could go to Hawaii for her Make-a-Wish trip. "I was afraid it would end my senior year of basketball and I wanted to keep playing," she recalls. "I never stopped." She was honored to have the same role as Brendan Kelley, last year's ambassador, who passed away from DIPG this past winter. "The original plan was that we'd do it together, but I'm excited to follow in his footsteps," she said.

Lauren was especially thrilled the proceeds from the Blast were going to The Cure Starts Now - dedicated to raising money for brain cancer research, the deadliest of all childhood cancers, yet the most underfunded. "If they solved the mystery of this cancer they could solve all cancers," Lauren explained.

Throughout her diagnosis Lauren was a tireless advocate and spokesperson for The Cure Starts Now's efforts to find the homerun cure. Lauren captured the hearts of people worldwide with her tenacity and determination to play in her first collegiate basketball game with her Mount St. Joseph University team. Since her game on November 2 she became a worldwide inspiration. Lauren used her voice for those children fighting cancer who are too young to speak for the need for funding research for the "homerun cure".Lauren went on to move a nation to raise over $1.5 million in cancer research before passing away in 2015.

She was very specific to note that she was not beat by cancer but rather that she beat cancer through the research she helped fund. To date, Lauren's efforts have raised over $2.3 million for DIPG research. Lauren was excited to pass her torch as ambassador to Super Luke in 2015. 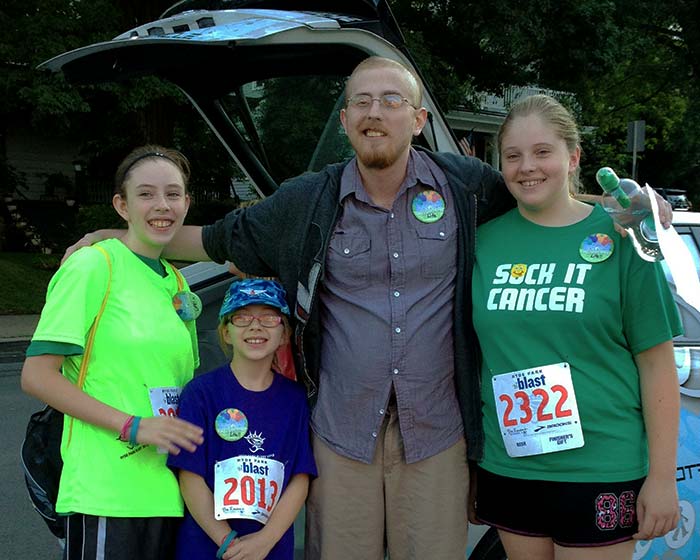 Brendan Kelley is a 23-year-old who was diagnosed with a diffuse intrinsic pontine glioma (DIPG), which is a tumor located in the middle of the brain stem, last February. He has been battling this disease ever since, including chemotherapy and six weeks of radiation therapy. He and his parents, Jeff and Nancy, are thankful for the care Brendan has received throughout his treatment, especially his oncologist, Mariko DeWire MD, and his staff at Cincinnati Children's Medical Hospital.

Brendan and his family were connected with The Cure Starts Now in May and Brendan is looking forward to sharing his story with others. "Attempting to learn more about my extremely rare disease, I came upon the DIPG registry and, through that, found The Cure Starts Now. What I found completely blew me away. I had no idea how little funded and researched DIPGs were," Brendan explains. "I'm honored to be chosen, but I also would like to take advantage of my condition to help spread the word for those who can't. Most of the people suffering through this disease cannot advocate for themselves and that's where I step in."

"We couldn't be more excited to have Brendan as our ambassador and source of inspiration for so many of the Hyde Park Blast participants," says Brooke Desserich, co-founder of the Cure Starts Now.

Brendan battled DIPG for 13 months, earning his wings in March 2014.